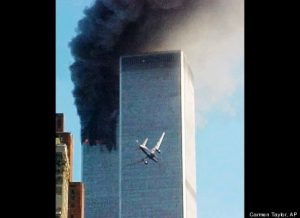 Twenty Years!  Seems like it was only yesterday.  Tracy Nichols and I were on our way to Yantis to work some properties.  The news bulletin on the radio said a plane had hit the World Trade Center.  My first thought was that a small plane had accidentally crashed into the building.

We were working the area around my mom’s place in Yantis.  We stopped in to visit and were sitting there with the t.v. showing the news with smoke in one of the twin towers.  As we sat there watching, the second plane flew into the second tower.  It was apparent at that instant that we were under attack.  For my generation …. this was our Pearl Harbor.  We were attacked by a group of fanatical cowards.  Over 3,000 innocent Americans were killed that day.

The tragedy of that day did something that is needed again.  For a short, very short time, it didn’t matter what political party you preferred, nor did who you voted for matter one bit.  We came together as a nation.  We pulled for one another, we dropped the hatred.  We Were One.

Everywhere you looked the American Flag was displayed.  Patriotism was at it’s highest since the World Wars.  People were scared and on the defensive.  We didn’t know if another attack was eminent or not.  For a couple of weeks churches were full of worshippers praying for America and those who lost loved ones in the attack.  Sadly, the togetherness of that day didn’t last long.  It was only a couple of weeks and the “blame game” started.  The political attacks had resumed.  We became divided, once again, as a nation.  I pray 9/11 never repeats itself.  I do wish that the togetherness would return.  It’s really okay that we disagree on issues but we are Americans and should always love our country regardless of who is in political power or what the hot topic happens to be at the time.

America is sick.  Neighbors hating neighbors, families fighting among themselves or petty things.  Friends arguing and disagreeing over absolutely nothing.

Could you imagine a country that everyone pulled for the good of the country?  We could once again be a world leader and a respected country.  We will never be that again until we put God first in our lives.  It will never happen until we respect our family, friends and neighbors.

There was and is a “battle cry” that was popular after the attack on America.  “Never forget”  I’m afraid we forgot.  Maybe not the cowardly attack, but we have forgotten how to love and respect one another.  Let’s pray that God will forgive and heal our nation and that we will once again be “One nation under God.”