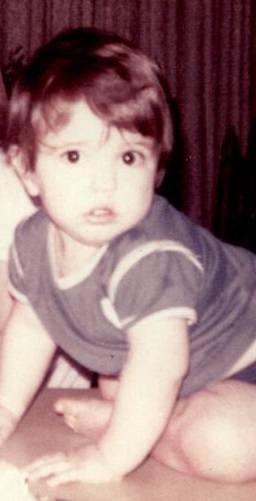 I hope you will indulge me as I write this story.  It is for me.  If you get anything out of it, only the better.

12,780 days ago, my youngest son, Kyle, was born.  Many of you probably have not heard of him.  Kyle was 5 years younger than Dori and 18 months younger than Eric.

Today is Kyle’s birthday.  He would have been 35 years old.  My God, where did the time go?

I know one thing; it was a lot nicer day than today.  I went back in the weather archives to see that the high for the day was 61 and sunny.  There was some concern a week or so prior to his birth.  There had been some icy weather the prior week and I recall a couple of nights spent in a hotel near the hospital. Eric got here almost before we could get to the hospital and it wasn’t about to happen this time.  Just a side note, Eric was in a hurry to get into this world and he hasn’t slowed down one bit since!

After 3 false alarms, racing through the streets of Mineola, Lindale and Tyler, Kyle finally arrived, right on schedule, on a beautiful Sunday.  I’d be lying if I told you I could remember the time of day.

My children were born before sonograms let you know the sex.  And thankfully, it was before they allowed dads in the delivery room.  I’m sure they would have spent more time reviving me than they would have delivering them.  Mother Francis Hospital had a unique way of letting you know if you had a boy or a girl.  They put me in this little room.  On the wall were a clock and two lights.  One was blue and one was pink.  That was how they informed you.  Blue and you had a boy, pink and you had a girl.  If it blinked that was when you fainted because that meant you had more than one…YIKES…..thankfully only one blue light.

The nurse FINALLY comes in and tells me everything was fine and did I want to see my new son.  She leads me (by the hand) to the nursery window.  She points Kyle out to me.  No way was my first thought.  Dori and Eric didn’t have a hair on their head until they were a year old.  Here lay a little baby that had a full head of black hair….that couldn’t be mine, must be some mistake.  She assured me it was the right baby.  The picture of Kyle at the top was taken just a few weeks before he passed away but the amount of hair he has in that picture was what I saw in the nursery on his first day on this earth.

Back then mom and baby stayed in the hospital for 3 days.  None of this having them that morning and going home in time for the 5 o’clock news.  You stayed 3 days, give them 1,500 dollars and off you go.  Strange how things have changed.  When it was time for feeding, the nurses ran everyone out of the room…dads included.  I guess they figured we dads had been through enough with all the labor stuff.

Eric was really young but he was pretty cool with a new brother.  Dori didn’t warm up to the idea immediately.  I had to crawl under her bed to coax her out.

The next 10 to 11 months was uneventful.  Kyle grew normally with no signs of any problems.  The following January he began having trouble with one eye.  We took him to specialist in Tyler who diagnosed it as “lazy eye.”  He was fitted with glasses thinking it would correct itself.  The first of February he came down with what the doctors thought was an intestinal flu.  He would “throw up” some mornings but would seem fine for the rest of the day.  Again, we took him to a local doctor and his pediatrician…getting the same diagnoses from both.  We took him back to his pediatrician three times in February.  Still the same diagnoses.  Realize, that other than the spitting up early in the morning he was a healthy young boy.  He would play with his brother and sister, watch television or whatever was going on.

On February 26, we took him back to his pediatrician.  The doctor still did not seem too concerned but he did want to admit Kyle to the hospital for testing.  We did exactly that.  Mom and dad had come to the hospital.  Dad went back home to milk the cows.  About 8 PM Kyle was playing in the baby bed they had in his room.  I gave him a kiss and mom and I left for home.  I stopped and got gas then proceeded to Yantis to take mom home.  I finally got home around 10:30-10:45.  When I walked in the door the phone was ringing.  It was the worst call in my life….bar none.  Martha was on the phone and she was in hysterics.  All I remember from the conversation was, “Something has happened to Kyle.”

The trip back to Tyler was made in record time.  I went through Lindale at a high rate of speed.  Two police cars caught me about the interstate.  When I explained the situation, these two Lindale police officers escorted me to the hospital.  One was in front leading, the other following.  They had radioed ahead and the Tyler PD had every intersection blocked for us.  Wish I knew the officer’s names.  I never got to thank them for it.

I arrived at the hospital.  Martha was a wreck.  Kyle had gone in to convulsions and stopped breathing.  The doctors were able to get his breathing going then placed him in the Children’s ICU.

I admit from this time forward, my mind is very vague about everything that went on.  I do remember the first person outside the grandparents was calling Jodie Kile.  She and Martha had been friends for years and Jodie was pregnant with Kara and Lyndsey at the same time as Martha was with Eric and Kyle.  In fact, that is where we got the name Kyle.  Just with a different spelling.  He was named after my dad Billy and we stole the last name of our friends.  “Billy Kyle George”

The doctors determined that Kyle had pressure building up in his head.  They did a procedure to relieve the pressure.  We waited with family and friends for most of the morning.  At around 11:30 AM the doctor came out and told us that Kyle was gone.  I freely admit that I questioned God as to “Why?”

Strange the things you remember about that day.  I couldn’t tell you 3 people that was in that room filled with people.  I remember Martha holding him and thinking how tall he had gotten.  I remember a very young nurse, who had worked with Kyle in ICU.  She was openly weeping.  I often wonder what happened to her.  Did she continue nursing?  Did the trauma of that day cause her to quit?  I hope not.  Sure wish I had got her name.

The funeral was held on February 29th.  Yes, it was leap year.  Martha’s dad, Dale Boyce Osborn and my brother, Barry George, conducted the service. Being a grandpa now, I hand it to Dale Boyce and Barry….not a chance I could have done the funeral. Do I remember the words that were spoken?  Not one. Janice Rogers sang a song or two.   Do I remember the songs that were sung?  No.  I remember very little about that day.

As I said earlier, I remember bits and pieces but one thing that stands out as if it happened this morning is my granddaddy Davis.  I remember being at the casket and looking back at Daddy Barn (that’s what we called him) and he was weeping.  Now my grandpa was a gentle man but he was tough as nails.  He had buried three of his own children.  There he sat, crying.  That was the first and last time I remember him shedding tears.

Outside the church I remember all the guys from Brashear, Cumby, Quitman and other places that I played baseball with.  They had turned out in force.  Many of my teachers were there.  All of my friends, Martha’s friends.  I would name them but I know I would leave someone out.  I was talking with them and they actually help me take my mind off of what was happening for a second.  I don’t recall who but someone came and told me it was time to go.  My dad was a deputy sheriff at the time and all his law enforcement friends lead the procession, followed up, block intersections and gave support to mom and dad.  I know dad was pleased at the response.

I had made one request of Mr. Wilson the funeral director.  I wanted the procession to go by the house on the way to the cemetery.  I wanted Kyle to get to go home one more time.  He did just that.  He even stopped for a few seconds in front of the house.  I remember getting out of the vehicle that we were riding in and standing in the road.  I have no idea why I got out.

It’s been many years.  The pain is not so great anymore.  It was a life-changing ordeal.  You eventually learn to live again.

Kyle died of a very rare form of brain cancer.  The condition it caused was Medullablastoma.  The cancer was undetectable unless viewed under a microscope.  It just shut down his little organs.

I have always heard that God will make something good out of tragedy.  I’m still waiting, although I know what it is.  I’ll share that someday.

I thank you for reading.  This is the first time I’ve sat down and wrote the flood of memories and emotions I had and have from that time in life.

Happy Birthday Kyle!!  See you someday, over the rainbow.

Here is a link to a song that Eric wrote and recorded from Kyle’s perspective on leaving this world at a young age.  It may not mean much to you, but it sure does to me.  http://www.youtube.com/watch?v=aeEF7NywGOg